Posted by anitabrown3d on April 3, 2013 in Architecture, Belfast, Form, Photographs |No Comments

If you Google ‘Belfast’ this is what appears on your screen:

I have a problem with this, and it’s a problem that will most probably never disappear (or will at the very least take many evolved generations to gradually disappear). In one sentence ‘Joe Bloggs’ will instantly have a negative, destructive and overall plain nasty viewpoint of the city that I call home (of which I’m also born and bred). The words ‘suffered’,  ‘damage’, ‘decline’, ‘sectarian’ and ‘violence’ all in one sentence is pretty overwhelming!

Don’t panic; I’m not going to get all ‘political’! Being from Belfast and having engaged in many debates regarding my little city’s political history; I find that it’s best to avoid, avoid, avoid.

So, in my quest to celebrate what’s good and positive and constructive about Belfast I’ve decided to share a few well chosen photographs that I hope will illustrate that Belfast is much more than the above ‘strapline’.

Living in a 16th floor apartment affords me the unique opportunity and privilege of having elevated views, and even though I usually take these views for granted, I do sometimes take a step back and appreciate them. There are no skyscrapers or modern architectural feats, but there is history, character, and dare I say humility in and around the streets of Belfast.

This isn’t an overally crisp photograph but I was in the office one sunny day and couldn’t resist taking this snap of the city especially with the iconic and historic Harland & Wolff cranes in the background (I want to start talking about Titanic but I don’t want this to turn into a history lesson. Moving on). Notice the equally impressive domed architectural features of Belfast City Hall (they were originally copper but due to oxidation are now green. Jeepers, now this sounds like a science lesson. Moving swiftly on). 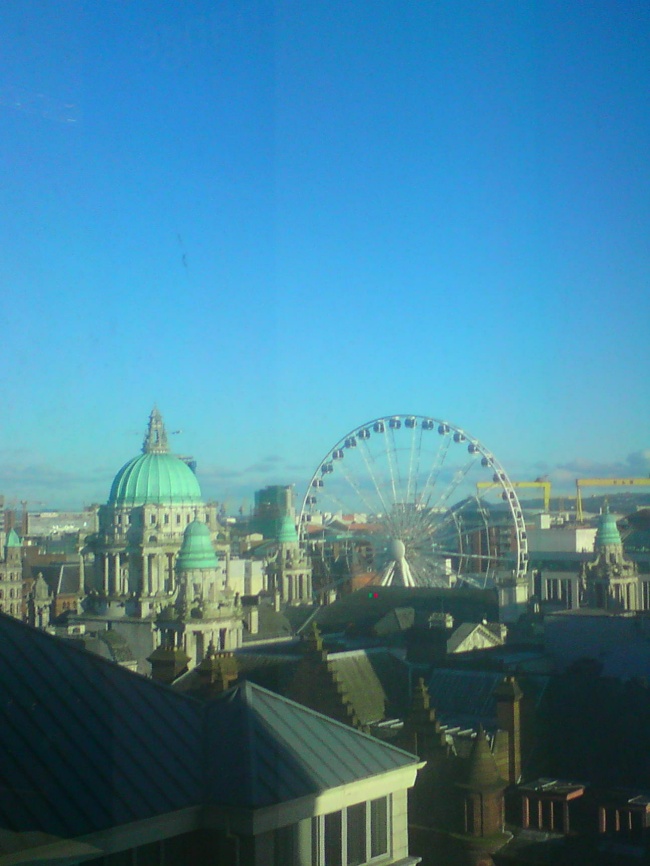 Then we have the actual views of a thriving and bustling little city, as seen from my apartment. 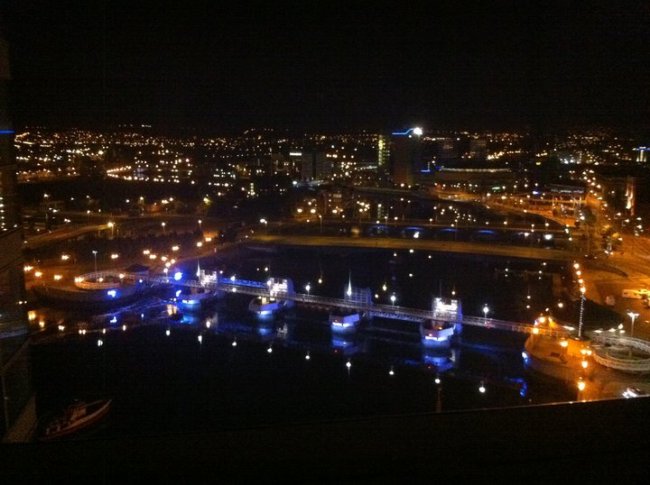 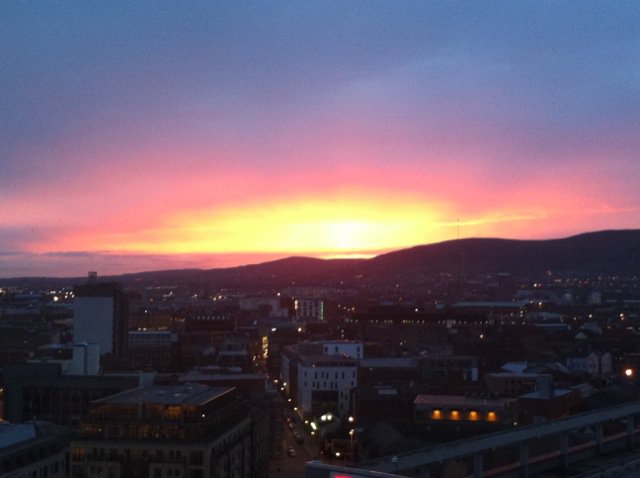 The obligatory sunset. What a beautiful (unedited) photograph.

Back on dry land I took this snap while walking home one evening (I was ridiculously excited to see that new funky purple strip-lighting had been positioned at the top of my apartment building. So excited that I felt an overwhelming urge to take a photograph. C’mon this is cool!). I should be pointing out the quaint tree-lined street with original cobbles but seriously, purple LEDs!! 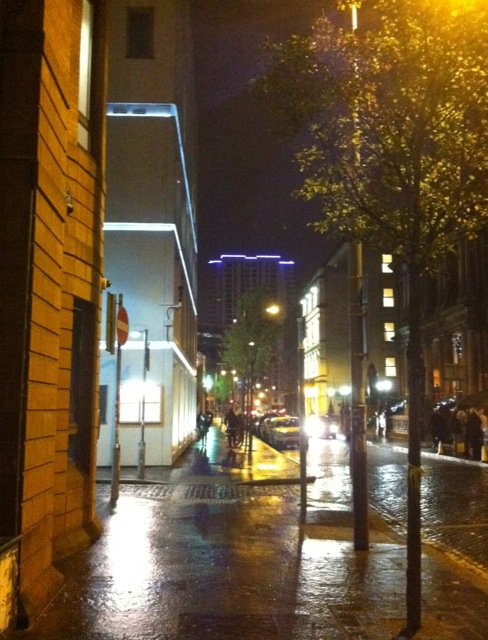 You want a lesson in character and personality? Then cast your eyes at the photograph below. P.S. I’m not referring to me; I’m referring to the toothless dude that my friends and I encountered recently on a night out in Belfast. Apologies for the zombie-esque eyes; this was taken without due care and attention to the art of photography. I’ve tried to get rid of the zombie eyes but without success. If anyone reading this has any ideas feel free to drop me a line; or better still take this photograph and work your (image editing) magic (Adam, you’re excluded from this because I’ve seen your image editing and I don’t want black teeth and horns, actually that could be quite funny…work away)!

What can I say other than, Belfast: I’ve got your back.