The Hand Rendering vs CGI Debate

I recently contributed to a group discussion in LinkedIn about hand rendering vs CGI.  I joined the discussion when the conversation became a 3D bashing session.

The ‘hand rendering’ supporters seemed slightly uneducated regarding the full capabilities of 3D Visualisation when it comes to Interior Design. Which is understandable, considering that most of the hand rendering enthusiasts had never used or had limited knowledge of  3D Visualisation.

I’m going to attempt to discuss this topic and dispel a few misconceptions regarding 3D Visualisation, whilst acknowledging the role of hand rendering, which is going to be a challenge given my specialism but I’ll give it a go.

First of all, I have (limited) experience of creating technical floor plans and rendered illustrations by hand and even though I only touched the surface, it was clear to me that it was a highly skilled art form.  I would never try to undermine the skill, dedication and talent required to produce a hand rendered interior.  Period.

A quick Pinterest search will present a huge library of illustrative delights, be it ink/pencil sketches, markers or watercolours.

Some have a no nonsense, technical approach.

Quite a few have a very soft, whimsical quality.

And there are many ‘abstract’ versions that you would literally hang on your wall. 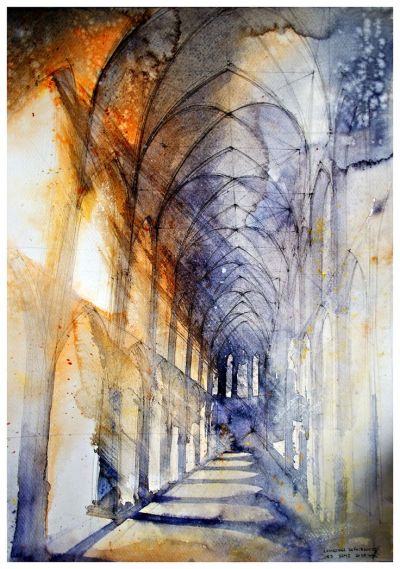 But in defense of CGI, softer and more whimsical ‘illustrative’ effects CAN be achieved.

So, if CGI has the ability to produce both photo-real and illustrative effects, the underpinning ‘for’ argument where hand rendering is concerned, would have to be authenticity.  Which I can appreciate.  If a Designer’s client (be it an Interior Designer or Event Designer) has a preference for an authentic hand rendered illustration ONLY, then obviously the Designer would be obliged to produce the goods.  I’m curious though, how often WOULD a client specify a hand rendered illustration if a high quality photo-real version could be provided?  I think it’s important to emphasise that my 3D visuals are created using REAL WORLD dimensions and physically correct lighting – pretty authentic, right?

I also think it’s important to highlight that many hand rendered illustrations use the ‘line work’ of a computer generated image as a starting point. This is to save time but also to ensure the perspective, scale and proportion is correct.  Just putting that out there!

Let’s talk about the single BIGGEST selling point of a hand rendered illustration, especially for a Designer ‘pitching’ their design concept to their client.

A photo-real 3D visual is (generally) only as good as the actual design and overall space.  The same applies when taking a photograph of an interior.  If the design isn’t overly inspiring or lacks the wow factor, it will translate.  There’s no hiding when it comes to CGI. There’s only so much lighting and photographic composition can do to make an image visually pleasing.

HOWEVER, hand rendered illustrations are much more forgiving.  Their soft, enchanting and whimsical attributes can dilute many ill conceived design ideas.

Let’s do a little experiment.

I Googled ’80s interior’ (we all know how ‘ill conceived’ many 80s interiors were, right?!) and quickly edited the photo using Photoshop to make it look like a hand rendered (watercolour) illustration.

Suddenly, this fairly average interior has taken on a whole new, endearing ‘chocolate box’ aesthetic.  Heck, I even like the interior, now that I’ve seen it presented as a watercolour!  3D Visualisers don’t have the luxury of blending and smudging lines.  They deal with real world values.  Kinda makes you think about the various challenges 3D Visualisers face, that perhaps you never considered previously, right?!

One of the recurring arguments against the use of 3D Visualisation was the general opinion that photo-real interiors were ‘cold and sterile’.  It was at this stage of the debate that I stopped lurking and joined the discussion, waving my 3D flag of course.

I think it’s grossly unfair to dismiss all photo-real 3D visuals as being ‘sterile’.  I will be the first to agree that there are some pretty dubious 3D visuals out there, that do indeed lack any sort of atmospheric quality.  One of the participants of the group discussion also said that she visited some sort of student exhibition and noticed the same ‘cold’ qualities.  Which doesn’t surprise me at all.  Creating a convincing photo-real 3D visual takes much practice, skill, research and years of experience.  It isn’t as simple as pushing a button and achieving astounding, realistic results.  The difference in the standard of a student’s work compared to a ‘professional’ 3D Visualiser will be IMMENSE.

I strive to achieve a high level of realism but also a visually captivating aesthetic and I would hope that anyone looking at the following images of my work would agree that they don’t appear cold and sterile.

Another recurring point of debate was that 3D Visualisation is merely a communication tool that is used once the design process has been finalised.  I agree that having the ability to hand sketch a few design concepts to get the ball rolling in the early stages is a huge bonus but as someone who actively uses 3D software to assist in the design of interiors, I gotta quash this argument.

My Homebase, Autumn inspired, Scandinavian bedroom, Victoria Beckham and Blush design scheme were ALL designed with the assistance of 3D software. Actually, 3D software is central to my entire design process.  I can only assume that lack of knowledge regarding the use of 3D Visualisation was to blame for people thinking that 3D Visualisation can only be used once a design concept has been completed.

One of the biggest benefits to using 3D software when designing a space, is that you can easily make revisions.  You can clearly see when something just doesn’t look right.  It gives you the freedom to play around with your ideas and this is invaluable.  I have had many clients provide me with all of the necessary information to create his/her design scheme and the minute they received the draft render, they decided to change elements of the design.  This level of flexibility cannot be achieved as seamlessly when hand rendering.

The ‘too perfect’ issue was raised, where photo-real 3D visuals are concerned and I gotta put my hand up and admit that hand rendered illustrations are unbelievable at providing an awesome level of character but this is mainly by default!  It’s primarily the medium used that provides the characterful qualities (don’t forget that similar qualities can be achieved via CG).  However, in defense of photo-real 3D visuals, the ‘perfect’ look is created due to client requirements.  THAT’S exactly what the client wants (specifically Interior Designers) and ultimately the 3D Visualiser must meet with client expectation.

I’m not sure that it’s right to compare the attributes and benefits of hand rendering with photo-real 3D Visualisation.  I say this because the personal, stylistic  preferences of an individual will usually influence which method they support.  In addition, preconceived prejudices concerning 3D software will usually come to the fore, regardless as to the astounding results that can (and are) being achieved.  I also feel that perhaps there’s a lot of fear and wariness of 3D software in many of the design industries.  The familiarity, safety and traditional appeal of hand renderings will undoubtedly play a role in compounding this level of wariness.

3D Visualisation isn’t the enemy, it’s here to enhance the design process and your ability to convey YOUR designs to YOUR clients.  Did I mention that it’s also invaluable at enhancing your portfolio and marketing potential too?!  Bottom line: it’s the end user who matters here (my client’s CLIENT).  You need to provide what the client wants, ideally an Interior Designer (or Event Designer/Wedding Planner) should be providing the option of either hand rendering OR 3D Visualisation.

I hope that some of the points I’ve raised have been food for thought regarding the use of 3D Visualisation.  Want to join the discussion?  Drop a comment below!